If there is one thing that can be said about the thrash metal band, SLAYER, it would definitely have to be that they have the most loyal fan base on the planet! Their fans live and breathe ‘All Things Slayer’! The combination of their nefarious lyrics and their duel growling guitars mixed with the bands overall stage presence have been known to produce mosh pits which are not only colossal in size but notorious throughout the world for being extremely brutal! Despite their slightly sacrilegious lyrical content, SLAYER is far from being the satanic devil worshipers for which they have been labeled. 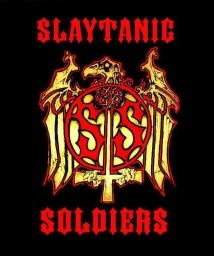 By the same token, not all Slayer fans are writhing, homicidal maniacs that one might envision. Many are just ordinary, hard-working people who simply share an extreme love for the band. Some fans have even formed groups on various social media sites such as Facebook, for the sole purpose of paying homage to the band.

One of these online groups is known as The S.S.213. The abbreviated letters specify that the members have loyaly proclaimed to be ‘Slaytanic Soldiers’ and the number ‘213’ refers to a favored SLAYER song regarding the apartment number which Jeffery Dahmer reportedly committed a large portion of his cannibalistic murders.

To some, the members of the S.S.213 might brandish a rather harsh exterior, appearing to be somewhat frightening in nature. Their presence could even seem to be a bit ominus, especially to those unfamiliar with the heavy metal lifestyle. Most people would probably not think twice before hurrying to walk down the opposite side of the street, getting away from these “rough-looking” characters. However, looks are very deceiving because this assumption could not be more wrong.

In reality, members of the 213 are some of the kindest, friendliest, most generous and well-mannered people, that one could only ever dream of meeting. The group is so tight net, they try to get together as often as possible by holding rallies which are usually centered around up and coming SLAYER shows . This select group maintains a maximum capacity of only 213 members, each one unique in his/her own right.

While these fans may appear quite small in numbers, this crew is most definitely larger than life! The founding members, Eric Webb, Brendan ‘Blue’ Garcia, Ed Berg, Michael ‘Mud Pig’ Moreno, Larry Haynes and Miss Brandy Schwertner-Gutierrez had initially met online, through one commonality shared between them all;their love of SLAYER.

Eric Webb: “I didn’t want to be in FSG anymore but their first and only rally was coming up in California. I knew my time was coming to an end, but since the trip had already been bought and paid for, I decided that I was quitting the FSG after the rally which I did as soon as I got back. I contacted Blue, Ed, Mud Pig, Brandy and Mike and made them my admins.”

Blue: “At first, we were in another group and they started talking a bunch of shit about Tom Araya and his wife, Sandra. So we quit and started our own thing. It’s grown from the few original members to 213 of the coolest people I’ve ever met. That’s why we call it the ‘Family’! ”

Ed Berg: “Originally, we were all members in a different Slayer fan club/support group, but because the group was putting Slayer down and talking bad about front man, Tom Araya and his wife Sandra, I quit the group. Eventually I ended up meeting Blue and Eric. We got together and decided to start our own group. Low and behold, here we are! ”

And here is where they shall remain!

The S.S. 213 welcomes people of all race, color, creed, religion, while having absolutely zero tolerance for anyone displaying any form of prejudiced opinions, whatsoever. The groups administrators are very selective, as well they should be! They have worked very hard to maintain a collective persona which represents the group, as a whole, and not to mention, the members of this group have developed close, personal relationships with the Araya family.

The process of choosing a new member begins when the prospective follower sends in a request to join the group. The admins scroll through the person’s Facebook page looking for certain characteristics and criteria which helps with their final decision. Then, the admins openly vote on the individuals’ entry into the 213.

There are of course, guidelines by which the members are expected to adhere. First and foremost, the members must treat each other with the utmost respect. This includes not only the band, to whom they glorify, but also other members and the admins as well. The other prerequisite for admission, is simply to possess an undying love for the band; SLAYER. 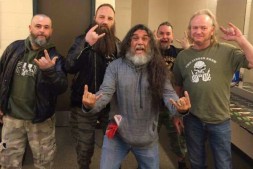 Members of the 213 hail from all over the world, starting from the Northern most upper regions of Canada, extending across into European countries such as Sweden, Norway, Germany, Belgium, Italy, down into the United Kingdom, and into the Southern-most continent of Australia, where the only three members are affectionately known as the Aussie Posse. The SS 213 reach extends across the Atlantic up into South America through Brazil and Panama, and finally making its way into the United States!!

So what exactly is it about the S.S.213 that makes this group so special? When the group originally began, they were an internet-based fan club, via Facebook. Since they have expanded, there has been lifelong friendships forged, relationships established, marital engagements and even a wedding among some of the 213 members! 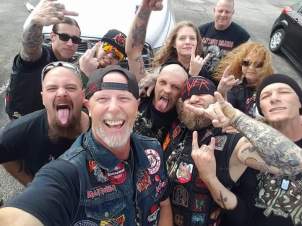 Along with the camaraderie and their love of SLAYER, the rallies are definitely one of the highlights of being a member! They are really quite special and most definitely something to experience first-hand! Group members, their significant others, their children, and various family members are invited to meet at a specified rendezvous point which is usually chosen in accordance with up and coming SLAYER shows.

A tremendous amount of preparation goes into planning a rally! Members spend months planning their trip, correlating their itinerary, making hotel reservations, booking flights, buses or train rides. All of this is done in order to plan the perfect trip, to see the perfect show, with 213 of the closest SLAYER fans around! Perhaps it would be best described as a ‘memorable moment in life that you could never really understand unless you experience it’.

The hardest part of the rally is when it comes to an end. As tears, hugs and handshakes must suffice as saying goodbye until next time, the memories that are made will be treasured for a lifetime. Speaking as one who has experienced a rally firsthand, I can honestly say that my life will never be the same.