AUSTIN, TEXAS-
Known as the ‘Live Music Capital of the World’, Austin, Texas has produced some of the very best musicians in the business and ‘Dangerous Toys’ guitarist, Paul Lidel, is no exception to the rule. His most recent project, ‘99 CRIMES’, will be headlining a highly anticipated cd release party to reveal this talented guitarist’s latest musical endeavors. 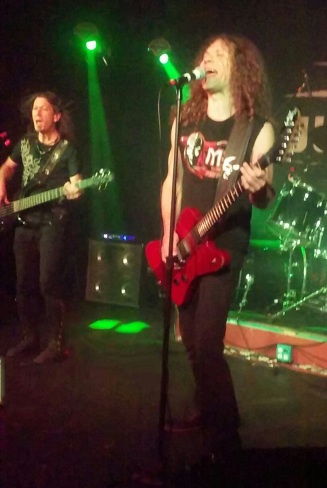 riginally from Rochester, New York,  the Austin Music Award winning musician, Paul Lidel unintentionally became a multi-talented musician, early in his career. Lidel originally started off playing drums. However, after a freak accident which left him incapacitated with a broken leg, the 16-year-old turned his focus toward the guitar. Just six years later, at the age of twenty-two, Lidel auditioned for a well-known 80’s rock band named ‘Dirty Looks’. He nailed the audition and the rest, as they say, is history.

“When I was 16, I broke my leg skydiving and since I couldn’t really play, I just left them (the drums) at the house where the band that I was in at the time, rehearsed. That was when I got really serious about playing guitar. Soon I traded my drums for a guitar and an amp.” said Lidel. “I can remember telling my parents when I was about 10 that I was going to be a professional musician and I’ve never looked back.”

He moved to Austin and joined local favorite band, ‘Dangerous Toys’, where he still plays today.

Today, Lidel definitely shows no signs of slowing down any time soon. Local Austin drummer, Chris Jordan, met Lidel after a Dangerous Toys show and have been playing together ever since. Lidel and Jordan incorporated their bass player, Jeff Lynn into the band and have remained a trio for over three years. The band has an amazing stage presence and with a fan base that is 100% loyal to the cause, 99 CRIMES is definitely on the way up!